The results are in for the top selling new home counties across the country, and Texas and the Southwest dominate. The chart below shows where homes have been delivered to homebuyers in the first half of this year (the gray bars). Of the top 10 counties in the nation for closings, 50% are in Texas. When overlaying our survey of contract sales, we can forecast shifts in deliveries for builders. For example, Houston should see a resurgence in closings in the coming months based on the wide spread between contracts and closings (50% in Harris County)*. The counties with the highest YOY change in contract sales are Collin in Dallas (+28%), Hillsborough in Tampa (+26%), and Clark in Las Vegas (+16%). Our Manager of Housing Economics, Ali Wolf, connected with our regional experts to better understand the nuances driving the local housing markets. 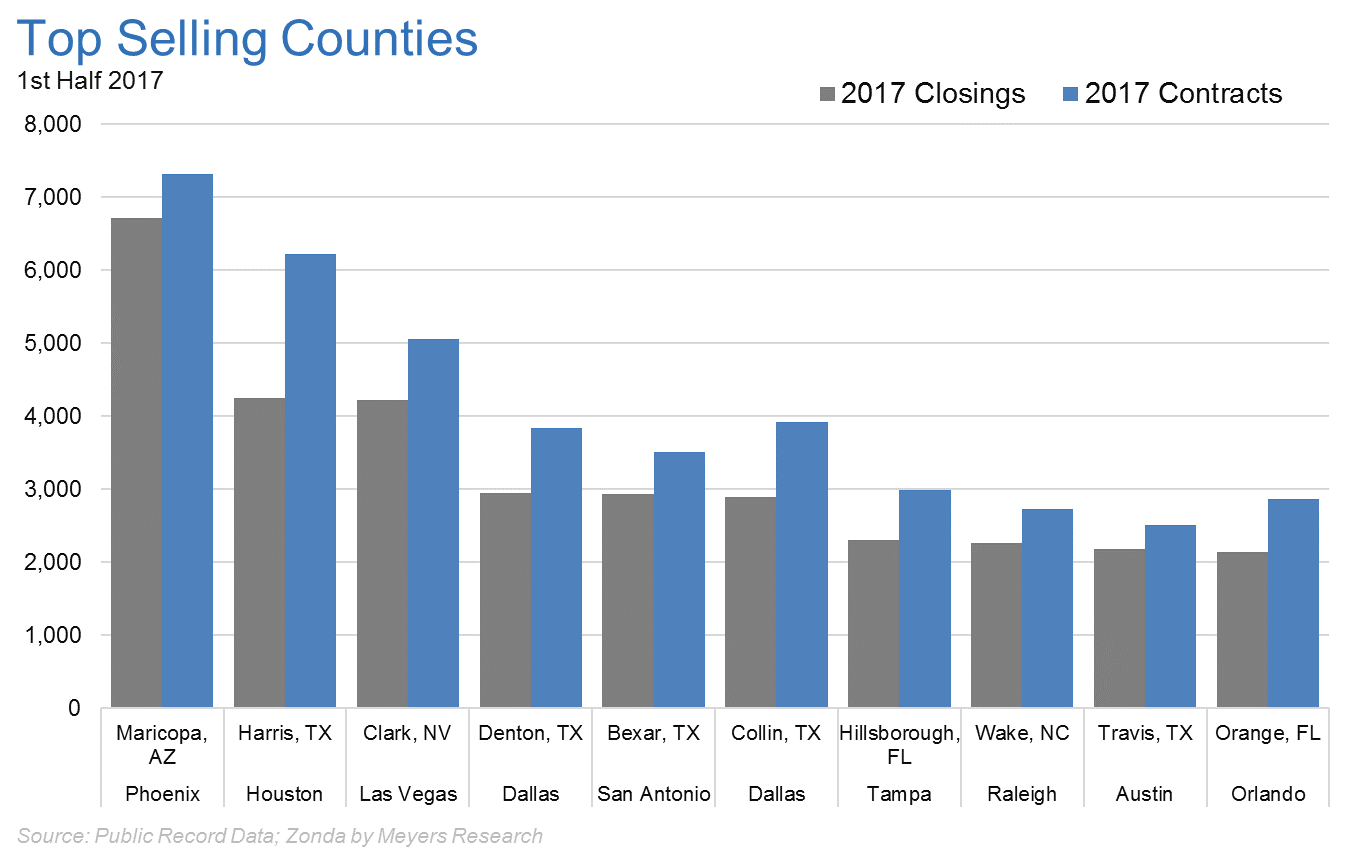 High-density attached communities are starting to resurface in the Valley after years of stagnation. Developers are acquiring and restarting well-located, infill parcels within Summerlin, a master planned community on the western side of the MSA. These acquisitions show enthusiasm and confidence in attached housing, albeit with some differences compared to the last cycle. Unlike the mid-2000s, developers are being more selective with sites and proceeding only in Las Vegas’ most desirable and established locations. “Available land in Summerlin’s core is getting gobbled up. We are seeing communities that were stalled in the mid-2000s resurface with updated concepts,” explained JT Schwartz, our Advisory specialist for Las Vegas. The comeback of urban, low maintenance housing is fueled by some big builders in the metro:

JT Schwartz continued, “these parcels are ‘holes in the donut’ in the community that offer a walkable proximity to many of Summerlin’s more desired retail and entertainment nodes. The aforementioned communities are in addition to the master plan’s urban hub, Downtown Summerlin, where there will be thousands of condominiums and apartments added over the next decade or two.” 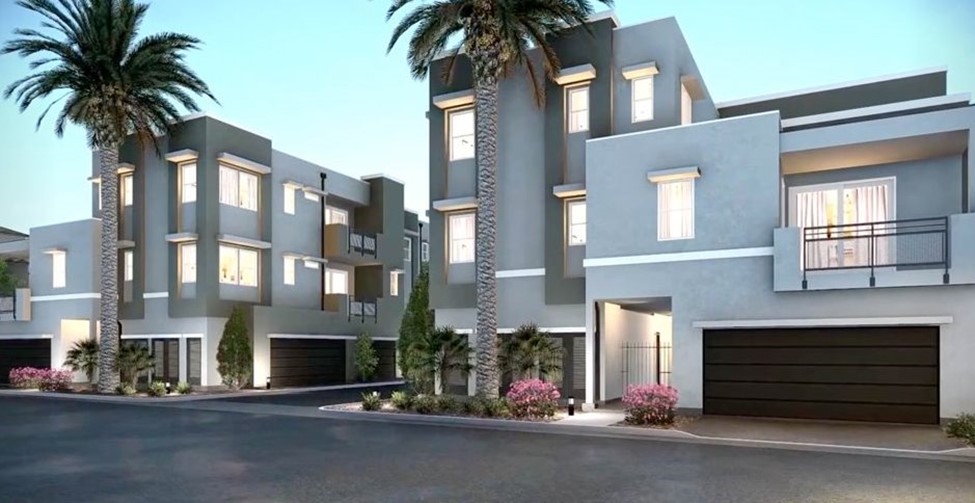 It’s no surprise North Texas has been a top relocation spot for years – job growth is tremendous (+3.3% YOY), the state is business friendly, there’s no income tax, and the cost of living is relatively affordable. “North Texas has got to the point that there are so many major employment announcements that some of them don’t even make front page news anymore,” explained our Texas Advisory lead, Scott Davis. More recently, companies looking to relocate or expand have been targeting the northeast portion of the metro, in places like Richardson, Frisco, and Plano.

Here are just a handful of recent big employment relocations or expansions in Plano, a city 20 miles north of downtown Dallas in Collin County.

These relocations are changing the landscape of the local housing market. Between August 2015 and August 2017, the total number of active projects in Collin County grew 40%. In addition, the median single-family new home price grew 40% in Collin County since 2012 and prices are now 44% higher than the 2007 peak. For locals, these price levels are unheard of, but that’s not the case for some of those relocating. In the Toyota example, some of those employed at the new headquarters came from the former location in Torrance, California. In Torrance, the median single-family detached new home closing price is just below $700,000. The same number is $390,000 in Collin County. Besides the 44% price differential between the two locations, many of the California workers also came to Texas with equity to put towards their new home.

Scott Davis believes the growth will continue. “Even with affordability challenges Dallas hasn’t faced before, I’m still very bullish on the market and future growth. I’d put Dallas among the top three housing markets in the country right now.” 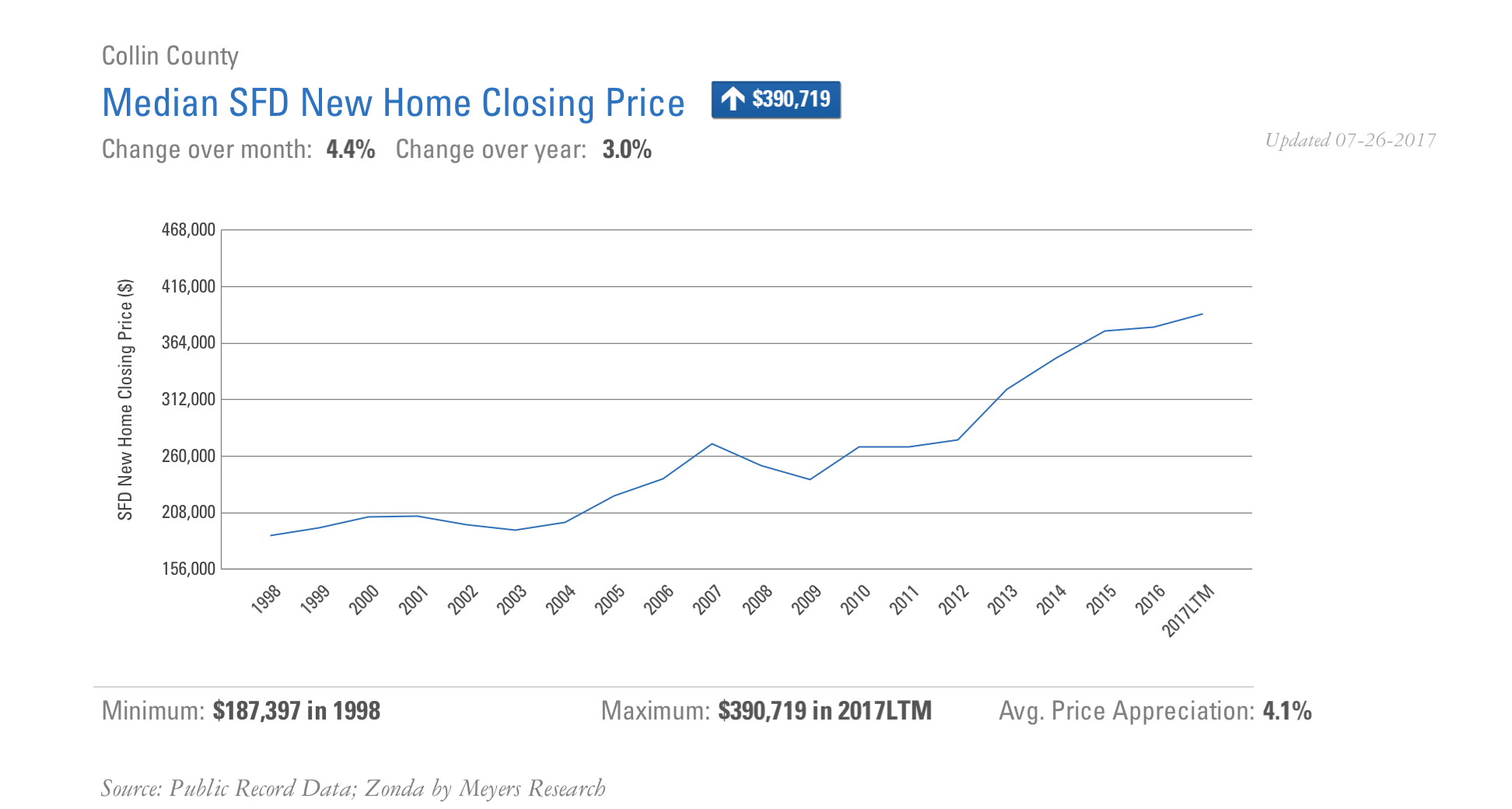 To round out the top three markets with the biggest YOY change in contracts, here’s our quick take on Tampa:

Contact us to discuss how we can help you grow sales in today’s competitive environment.

*Hurricane Harvey that swept through Texas will negatively impact new home closings and deliveries in the coming months as the market deals with the immediate aftermath of the storm. We are monitoring the situation and will report implications on the regional economy and housing market as the flood recedes and the damage can be more clearly assessed.