We often blame the inability of builders to bring homes to the market fast enough as the major headwind for housing supply, but we’ve learned that existing homeowners are often the crux of the problem. The latest data from the National Association of Realtors notes that homeowners are staying in their homes for an average of 10 years before selling, reaching an all-time high. What we find even more stark is that in 6 of the top housing markets across the country, 20%+ of all households have not moved in nearly 20 years. Our Manager of Housing Economics, Ali Wolf, was intrigued by this data and highlights some trends below.

The markets with the highest percent of homeowners staying put largely share a few things in common: a centralized downtown, lifestyle desirability, and affordability challenges. Among top markets, the notorious bubble markets, Phoenix and Las Vegas, have the lowest percent of tenured homeowners. In 2005 alone, the Las Vegas CBSA had a combined 100,000 new and existing homes transact. In Phoenix, that number totaled 223,000. 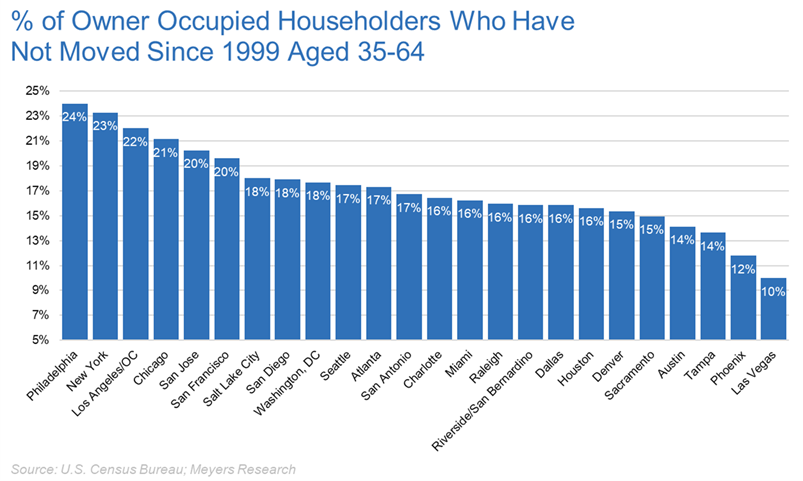 For those that haven’t moved, we identified key factors that influence their decision. You’ll note that many of the reasons have to do with the psychology of the homebuyer and seller. Makes sense why Richard Thaler, the father of behavioral economics, won the Nobel Prize in Economics earlier this year.

Scars From Great Recession. Over 8 millions jobs were lost during the last downturn, leaving many financially unstable. In addition, foreclosures peaked at roughly 2.9 million in 2010, similar to the level in 2009. Those that have owned their homes since 1999 and didn’t go through the foreclosure crisis were still part of the collective experience that impacts the consumers mindset today.

Property Taxes Will Jump. While many of these homeowners will have an abundance of equity in their home, moving will change their tax landscape. For example, if someone bought a new home in the city of San Jose, CA in 1999 for $511,000, they’d pay an annual $5,110 in property taxes, assuming a 1.0% rate (these are basic assumptions). If the same person decided to move and buy a house based on what their home is worth today (~$1M), their property taxes would jump to $10,000 a year. We acknowledge this will be more pronounced in markets that have seen rapid appreciation over the years and does not apply in every instance.

Refinance Changes The Payment Equation. Mortgage rates were at 8% on average in the late-1990s. In today’s rate environment, many of those that held onto their homes have benefited from historically low rates; the average rate on a 30-year fixed rate mortgage is still below 4.0%. Using the same San Jose house from the example above, if the homeowner refinanced from an 8% mortgage to 3.9%, their monthly payment could change by as much as $1,000. There’s a good chance these owners will continue to hold their homes if mortgage rates start to rise.

Holding The Home As An Investment Property. The number one financial regret I hear from older generations is that they wished they held onto their starter home as an investment property instead of selling. Some of the owners that haven’t moved since the 1990s were lucky enough to heed that advice and are currently using their home as a single-family rental.

Renovations To Make The House Work. Trends in the remodeling sector suggest more people are investing money into their home. The Leading Indicator of Remodeling Index forecasts that home renovation and repair spending will rise 6.3% YOY in 4Q17. It’s unclear if people are remodeling to stay put or remodeling to sell their homes, but we believe there’s a fair share of both. For the remodelers, we see the money coming from two main sources: home equity loans and their savings accounts. 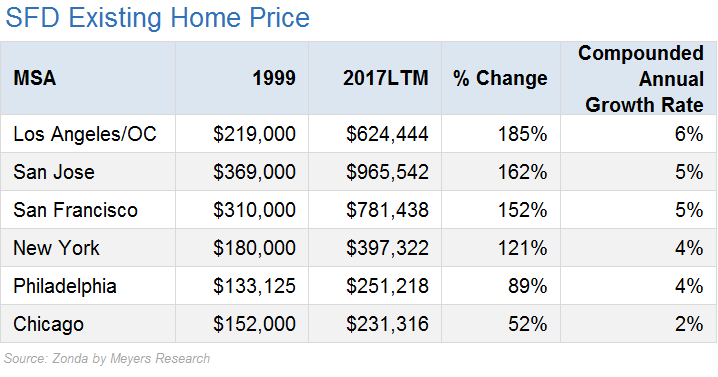 *even when we adjust for inflation, the growth rate remains notable

For those 20% of homeowners that haven’t moved in over 20 years, their homes are worth far more than when they purchased them. For example, a homeowner in the Los Angeles CBSA that purchased a home in 1999 has seen a 6% (!) compound growth rate; the rate is 4% when adjusted for inflation. In addition, these owners never paid out transaction costs of buying/selling homes over the past 20 years, contributing to their overall financial well-being. If and when these homeowners finally decide to sell their homes, they will be a boon to the overall housing market.

We’d love to talk about how we can help you build homes that entice homeowners to move.