The Greater Phoenix market remains one of the top in the nation in terms of population and job growth, but growth in residential building permits during the first half of 2015 may not serve as an indicator for what is to come. Our Senior Vice President Ryan Arp has been busy helping builders plan for their next position in the market, but is noticing a few trends that local industry professionals face as they make their next strategic move. Consider the following:

There are a number of factors and trends that are occurring in Phoenix that indicate market strength, such as: 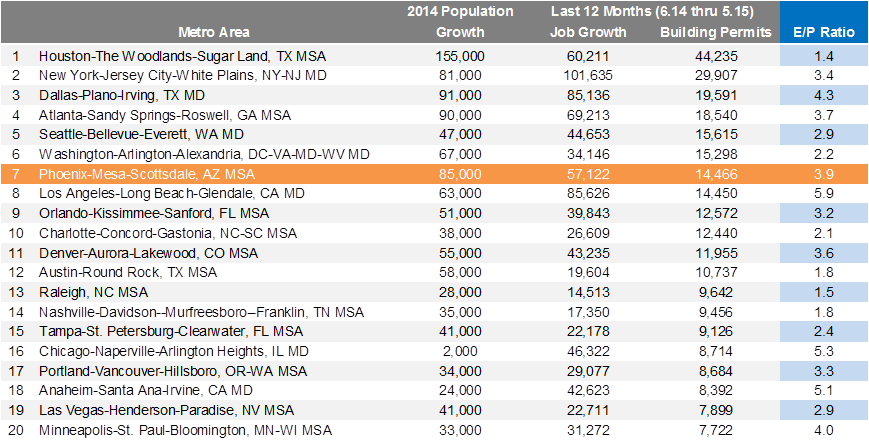 Clouds on the Horizon

The points above are certainly positive, but builders are also dealing with rising materials costs, inflated land prices and labor shortages. The majority of builders have worked through their impaired land assets and are currently building through the assets they purchased in 2012-2013. Often many of these parcels were underwritten assuming some level of market appreciation, but if appreciation rates for that given submarket did not materialize as expected, then margins on communities could see additional compression. In addition, some builders are experiencing expanded cycle times, and have employed a strategy of putting more spec homes on the ground to reach year-end numbers. The result of these compressed margins and longer build times could be a slowdown in permits as we enter the final quarter of 2015. Further, with the weaker Canadian dollar, we are seeing a slowdown in the presence of Canadian buyers.

While challenges and growing pains will continue to be a reality for the local market, our research and experience (and the relative value that Phoenix offers compared to higher priced areas in nearby California) suggests that the proverbial sun will shine brightly on the Valley for some time to come.