Your take on the DC MSA totally depends on perspective; some will tell you the city is the strongest in the region, while others will highlight reasons for concern. Whichever way you look at it, there’s no denying some overarching themes for the metro. Our Manager of Housing Economics, Ali Wolf, explores them below:

Home Of The Educated Elite

DC is a haven for highly-educated individuals and is frequently cited as the most educated city in the US. The city attracts many new graduates looking for a plethora of job opportunities with good pay. The MSA is also commonly noted for being one of the most affluent across the country. The Washington, DC market is home to 8 out of the top 15 counties in the country with the highest median income.

The MSA is commonly ranked as the most attractive city for Millennials.

Even though incomes are high and job opportunities abound, affordability is a key threat to retaining the Millennial population. High home prices may force the next generation to more affordable cities like Philadelphia or Baltimore. The US homeownership rate is roughly 64%, while the DC MSA is closer to 42%.

Persistent threats of federal budget cuts and the aftermath of sequestration hurts the local market, especially since a large part of the economy relies on the federal government.

Uncertainty over the outcome of the Presidential election (in a town where many jobs are politically-dependent) could lead many households to delay their homebuying decision until after the outcome is known, thus dampening current demand. The data indicates that some homes are already selling at a discount to their asking price, while new home communities are once again offering incentives to buyers.

Location is everything in the MSA. Buyers seem more transit-oriented than ever before so builders are ramping up production near Metro stops to capture this demand (think of the huge redevelopment at Capitol Crossing near Capitol Hill, Reunion Square in Anacostia, and the Navy Yard and Vienna Metro stations). While good in the long run, this is creating congestion near the developments in the short run.

Here are the current stats for the DC MSA:

When talking about the overall DC housing market, it’s impossible to accurately describe the current state without focusing on particular submarkets. For this analysis, we will only cover the District and inner-ring communities of Virginia (Arlington, Alexandria, Loudoun, and Fairfax counties).

Looking at the region by sales, Loudoun County is outpacing the others with an average of 2.21 sales per month per community, though tracking closely with The District (2.00) and the national average (2.22). The most active builders in Loudoun County are NVR Inc, Toll Brothers, and Van Metre Homes. 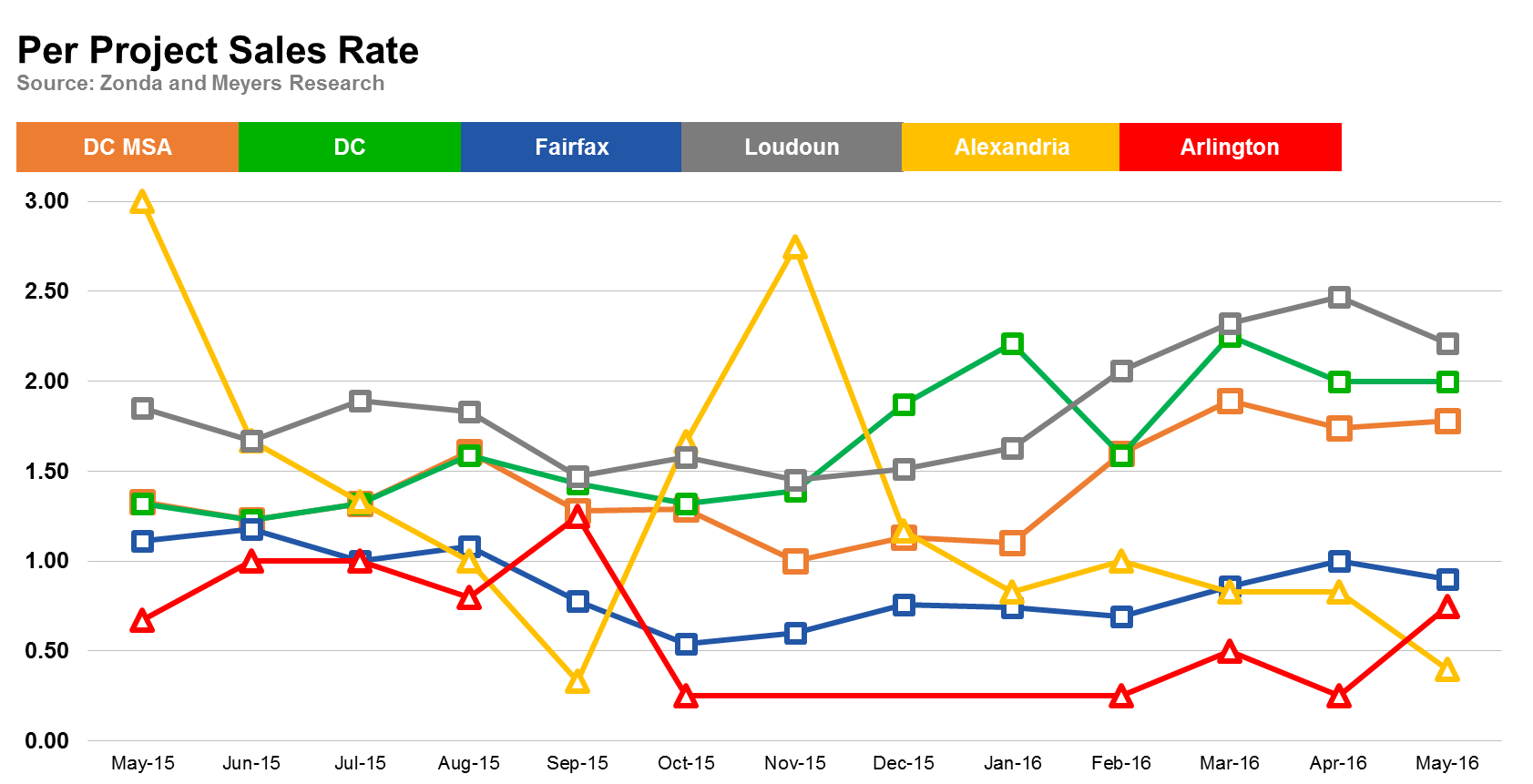 Loudoun County’s proximity to the Dulles Corridor is a boon to the local housing market. Median income is well above the nation at $128,000 and the county is the world headquarters for some major corporations, including Verizon Business, Telos Corporation, Orbital Sciences Corporation, and Paxfire. The local unemployment rate is 3.1%.

This western county is the epitome of urban sprawl. There are big homes and plenty of job opportunities, but also a lot of traffic. However, Loudoun County is on the expansion path for Phase II of the Silver Line Metro, which may alleviate some congestion and allow for easy connectivity between the western suburbs and the District (Phase I has already helped). Builders and developers are currently working through visions and plans for redevelopment of the area, including making the lifestyle more urban.

Westmore by Ryan Homes is the best-selling community in Loudoun County. The townhomes in Ashburn opened in February of this year and have been selling at an average pace of 9.3 homes per month. The attached homes range from 1,800 and 2,900 square feet and are priced from $460,000 to $540,000. Westmore is desirable for a multitude of reasons:

Contact us to discuss how we can help you with your next metro analysis.