We are nearly 7 years into the economic expansion, yet for some metros, returning to peak existing home pricing is a long way off. Of the nearly 100 metros we cover in Zonda, roughly 30% have recovered in terms of current price to peak and 60% are still recovering [1]. Our Manager of Housing Economics, Ali Wolf, highlights 5 top recovered markets and 5 bottom markets left to recover below. The breakdown of price showcases fundamental differences between metros that have recovered and the laggards.

THE FULLY RECOVERED DIDN’T EXPERIENCE A DETRIMENTAL BOOM AND BUST

As the graph below highlights, the top 5 fully recovered markets didn’t experience a run up in existing home prices like some other metros, helping them avoid a crash. 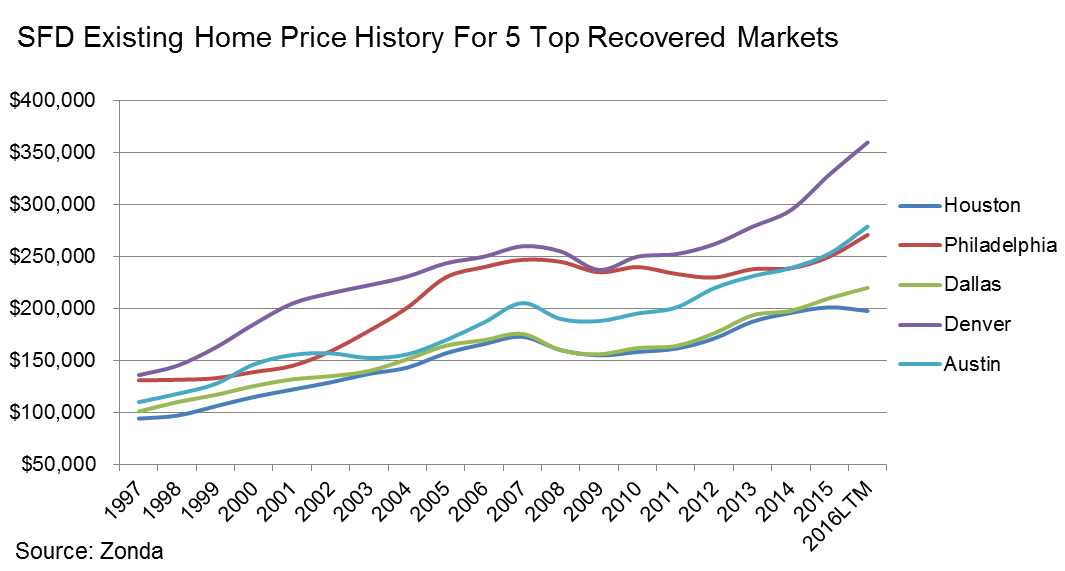 Texas. Three of the top five MSAs that have exceeded their previous peak are in Texas. Texas was comparatively unaffected by the housing crisis. For example, Austin peaked at $205,000 in 2007 and reached bottom in 2009 at $188,000. The state is famous for their flexible land use regulation, which generally minimizes large swings in land prices. As housing demand increased during the boom, builders were able to easily, quickly, and affordably increase supply. In addition, when mortgage standards across the country became loose, Texas officials capped the cash-out and home-equity loans at no more than 80% of a home’s appraised value. Since the 2009 trough, home prices in Austin, Dallas, and Houston have accelerated. Austin hosts many corporate and regional headquarters, including Dell, IBM, and Apple, which supports the local housing market with high wages and steady job growth. In addition, Dallas’ burgeoning tech sector combined with corporate relocations is fueling higher home prices.

Denver. New and resale home prices are back to pre-recession levels in Denver, again in part because the MSA didn’t experience a boom like in other parts of the country. Current single-family existing home prices are 26.2% above their prior peak and nearby Colorado Springs (+9.2%) and Boulder (+10.5%) have also exceed theirs. Much of the growth since the recession can be attributed to high in-migration resulting from diversified job growth, an influx of start-ups, and a desirable lifestyle. Denver continuously shows up on lists highlighting the best tech cities, and the high wages associated with this sector supports local housing demand and price appreciation.

SAND STATES STILL HAVE A LONG WAY TO GO

Top metros in Florida, Arizona, Nevada, and California appreciated substantially during the housing heyday, but were also hit the hardest during the crash. Data from the Mortgage Bankers Association showed that of all the mortgage foreclosures that started in 2008, more than 40% came from the four Sand States. During the upswing, these markets shared some characteristics, including:
The graph below shows that despite gains in home prices during the recovery, prices in these markets still have a long way to go to reach peak pricing again. While returning to peak pricing would help those homeowners still underwater on their mortgages, the pricing in 2006/2007 was artificially inflated and not necessarily the goal for those markets going forward. 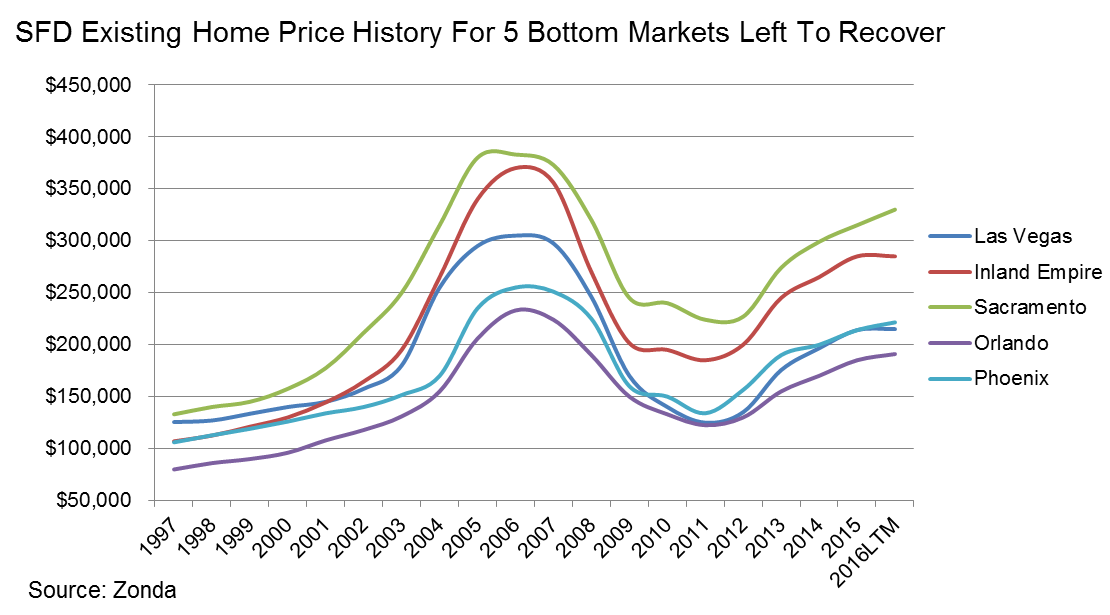 Las Vegas. The housing downturn wiped out the local economy, causing foreclosures, bankruptcies, job losses, and more. While the Las Vegas market is improving, some homeowners are still suffering from the ramifications of the housing bust; currently 21% of homeowners hold underwater mortgages, down from the 2012 peak of 71%, but still the highest among large US metros. Prices are the furthest from their peak of top metros in Las Vegas and the region may need several more years to feel fully recovered.

Inland Empire. The Inland Empire has improved since the trough, though at a slower pace than locals would like. The two biggest sectors for job growth in the MSA are logistics and construction, and neither sector offers the highest income categories. Stagnating incomes influence the type of homes locals can buy. For instance, roughly 43% of all closings occurred between the $160,000 and $320,000 price range, just below the FHA loan limit of $356,500; purchase activity waned beyond $400,000. Distressed sales are still historically high in the MSA, but the rate is significantly improved from February 2009 when over three-quarters of all home sales in Riverside and San Bernardino counties were distressed. An increase in the FHA loan limit for the Inland Empire would provide a significant increase in new home sales activity.

The high percentage of metros that have not returned to peak can help explain the dearth of inventory. Until prices fully recover, many homeowners who bought at or near the peak will remain virtual prisoners in their homes, unable to sell or relocate due to the fact they can’t sell their home for a price that also lets them pay off their mortgage. “For the housing industry, this creates a ‘gridlock’ effect that causes overall home sales to be lower than otherwise, because the pool of prospective buyers and sellers is smaller than it otherwise would be. For the national economy, this restricts labor mobility between different metro markets, because underwater households are unable or unwilling to sell and relocate to places with more economic opportunity. This restricts the labor supply in the US, driving up production costs and causing GDP growth to be less than it otherwise would be.” explains Kevin Gillen Ph.D., our Chief Economist.

If you have any questions or would like to see an MSA not covered, please contact Ali Wolf, Manager of Housing Economics.