There are a lot of factors contributing the low homeownership rate, including the lowest level of housing supply since 1999 and 5 consecutive years of home price appreciation. Not to mention, more risk aversion since the Great Recession, slower than expected wage growth coming out of the downturn, and delayed life choices among younger Americans.

Looking at the homeownership rate by age, those under 35 have historically had a lower rate than those older. With that being said, the rate for individuals under 35 peaked at 44% in 2004, and has since dropped to 35%. Our Manager of Housing Economics, Ali Wolf, pulled the homeownership rate by MSA and examined markets that are attracting a higher proportion of younger buyers.

Of the top markets we analyzed, those with above average homeownership rates for individuals aged 25-34 were all in eastern states, with the exception of Denver and Phoenix. Not surprising, the six markets with the lowest rate are all coastal. 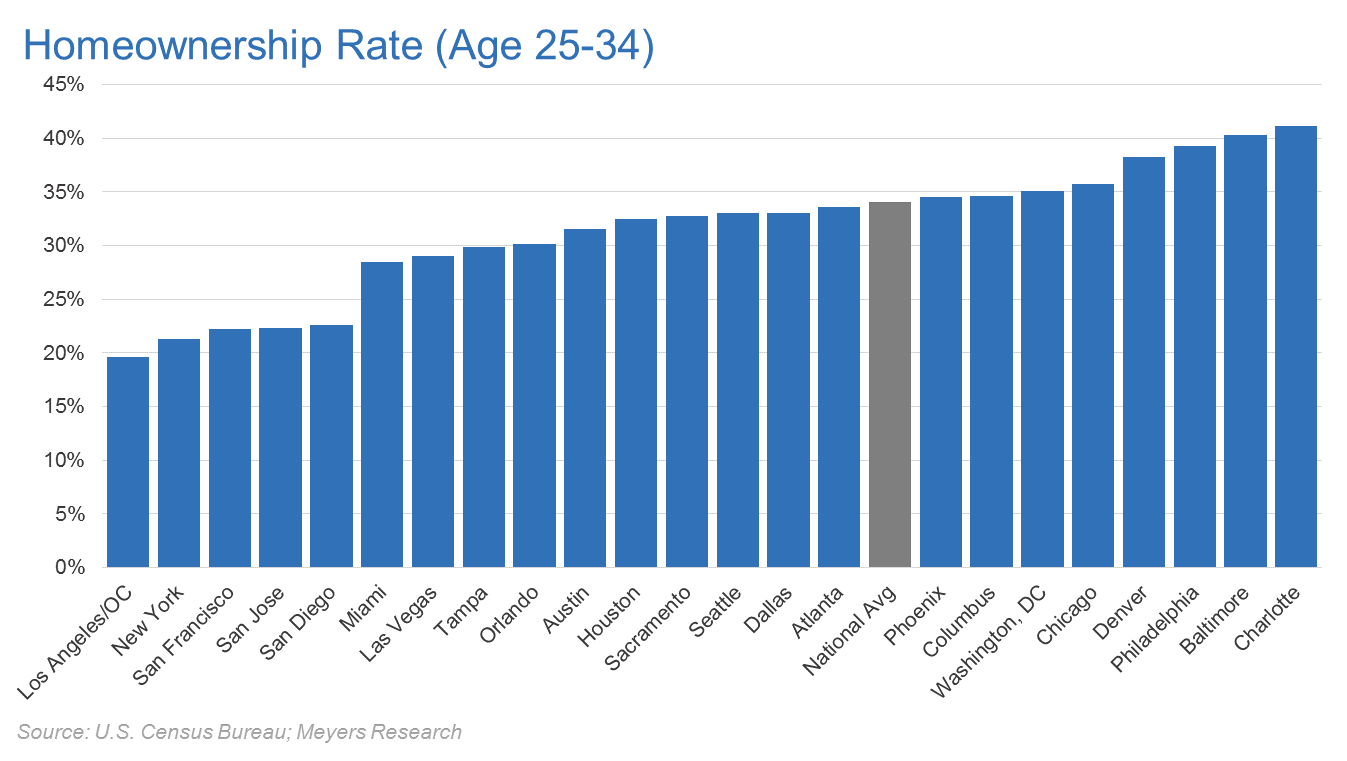 Charlotte topped the list for the highest homeownership rate among top metros for Millennials at roughly 41%; the homeownership rate for all age groups in the market was 68%. Charlotte gained a lot of attraction from the younger generation in recent years due to the temperate climate, healthy labor market (jobs grew 2.0% over the past year), and relatively affordable housing. In fact, Apartment List showed that Charlotte had the highest population growth for Millennials from 2005-2015, up 30%.

The pricing in the metro has allowed many Millennials to purchase a home; nearly 60% of the active attached projects tracked by Zonda in Charlotte are priced below the FHA loan limit, while 40% of detached projects fall within the cap. Roughly 30% of the loans made from November to January in Charlotte were through the FHA, according to Ellie Mae. Their data also indicates the average loan amount was just under $200,000 with an average down payment of 13% and a FICO score of 728. Lennar is the top builder in Charlotte, with a stronger sales pace and lower average price than many other builders. Their median price is also roughly in-line with the metro’s $280,600 FHA loan limit. Part of Lennar’s success in Charlotte comes from their focus on townhomes in good locations.

“To attract Millennials to purchase a home, it’s all about providing a vibrant location and low maintenance product at the lowest price possible,” explained Shaun McCutcheon, our Charlotte-based Senior Manager. “We are starting to see builders enter higher priced neighborhoods with excellent schools by offering small lots/cluster product in order to keep costs down and attract Millennial buyers. An example of this is Sonoma by Shea Homes near Ballantyne, which is selling detached cluster product in the $300,000s at a sales pace of over three homes per month. An added bonus? The community offers free lawn maintenance for owners.”

Contact us to discuss how we can help you with consumer-based segmentation in your market.