The availability of construction labor in Dallas is becoming somewhat of a limiting factor to this market’s housing market growth. The median new home price in the Dallas-Ft Worth MSA increased 43% since 2012, and the most recent Case-Schiller survey showed that the Dallas market was behind only Seattle and Denver in price appreciation over the last four years. Meanwhile, incomes only increased by half as much. Dallas is also benefitting from a strong economy, adding over 118,000 jobs last year (a +/-3.8% increase). In fact, Dallas is now among the top performing local economies in the United States, and the strong economy pushed new home sales in Dallas to almost 25,000 in the last 12 months. This is second only to Houston, by about 1,000 units.

What is keeping Dallas from becoming the number one single-family home market in the U.S.? Labor availability appears to be a major constraint. Data from the Texas Workforce Commission shows that at the end of 2016, nearly 81,000 people were employed in construction-related occupations. Since that is one of the larger construction workforces in the United States, it is difficult to even recognize that an under-supply condition exists.

Our Senior Vice President of Advisory Scott Davis analyzed wage and job growth data in the market to help shed some light on this notable concern. He started by reviewing data from the Bureau of Economic Analysis, which analyzes the economic and labor contributions of nearly every industry in most of the major metropolitan areas around the United States. This is achieved by developing multipliers from an input-output model–or an analysis that can show the impact of $1 spent both inside and outside an industry on the general economy. He then reviewed the multipliers for the homebuilding and construction industries and compared them against the value of single family homes, commercial real estate projects, and public sector construction work from 2016. The result of this research is that at the current level of activity, Dallas should have more than 99,000 construction workers–a shortfall of 18,000 (see Exhibit 1).

The results of such a significant shortfall are predictable: construction wages are some of the fastest increasing in the MSA. In a market where average hourly wages across all industries has only increased 10% since 2012, wages for key construction industries have increased two to three times that amount–both for skilled and unskilled construction occupations. As illustrated in Exhibit 2, the fastest growing hourly wage in the MSA was for “Helpers-Brickmasons”–a 35% increase.

What is more troubling for the construction industry is that the current supply of workers is aging, and Millennials are not filling in the gaps. The median age of overall construction workers in the U.S. today is 40.4 years, and some are significantly older. The median age for Painters and drywall installers is 41, pipelayers and plumbers, electricians and carpenters is 43, cement masons and equipment operators is 44. Only roofing and carpet and floor installations have median ages under 40. Millennials are not being attracted to these occupations to gain skills and experience to replace these older workers, and if/when they do go into construction, they appear to be most interested in “green” trades like solar cell and insulation installation (see Exhibit 3).

Unfortunately, there is no easy fix to this shortfall of workers, and if the Trump administration pursues the immigration policies the President advocated as a candidate, the need for skilled construction workers could become far worse. Although the Dallas market is tightening, there are still great opportunities for investment in development in this economically vital and growing region. But the potential for runaway cost increases makes understanding the demand and opportunity for each individual project critical. 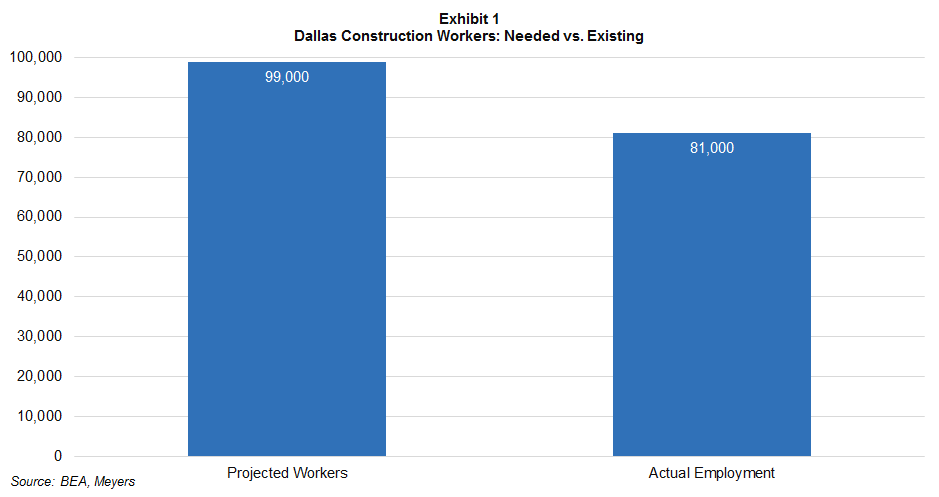 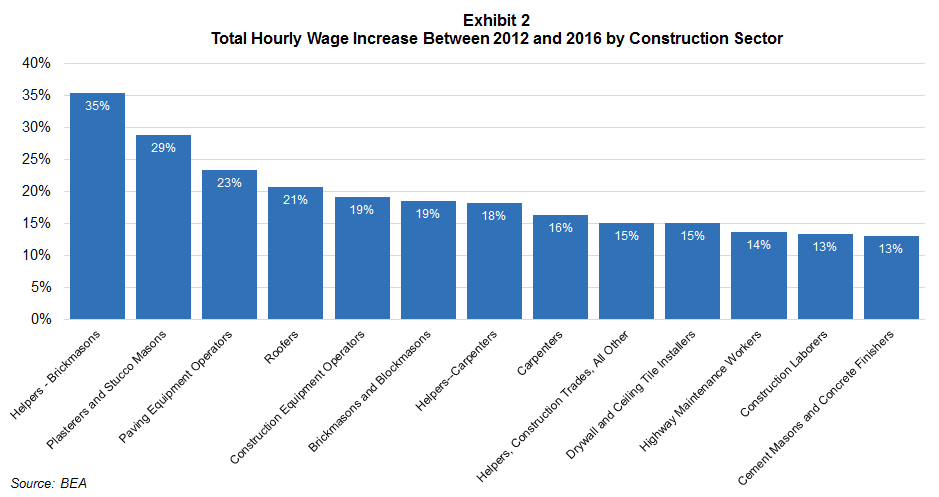 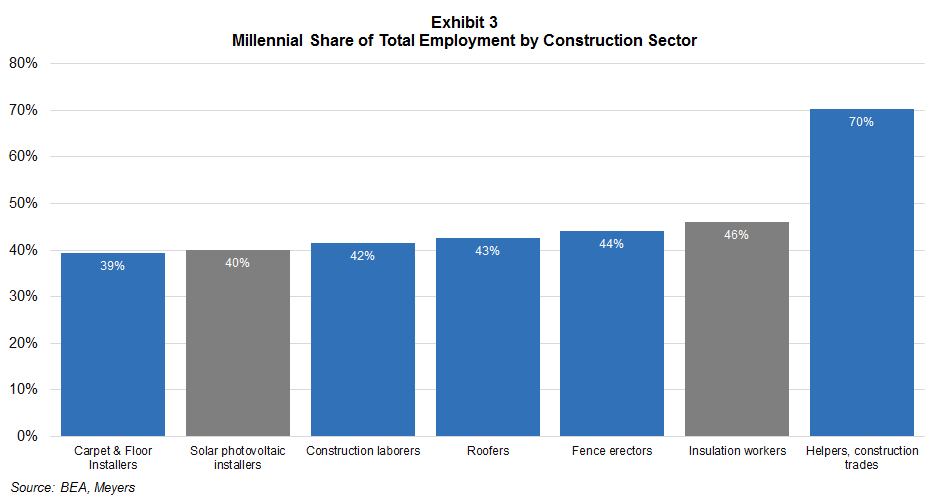 Contact us to discuss how we can help plan for your next project in Dallas or anywhere around North America.