Bay Area home price appreciation carries on unabated. Rising prices are fueled on the demand side by jobs created from the diverse economy (it’s not just tech) and the desirability of the metro. On the cost side, limited (and expensive) developable land and high construction costs also prop up prices. It is no surprise that the Bay Area is unaffordable for the average buyer given 5+ years of consecutive price gains and appreciation that is outpacing wage growth. Many individuals in employment hubs like the South Bay, East Bay, and San Francisco are priced out from living in the same city they work and must consider less-than-prime locations if they wish to purchase a home. This poses a huge opportunity for builders looking to capitalize on new developments outside of the largely built-out and supply-constrained A locations.

Our Manager of Housing Economics, Ali Wolf, pulled contract sales volume for new homes in the 9-county area from our Zonda iPad App to determine where the activity is. Given the housing composition varies substantially from city to city, we’ve broken down sales volume by attached and detached properties to better understand how builders are maneuvering the tight market.

SALES FLOURISH IN “A” MARKETS

San Francisco, a city where roughly 90% of all sales are from the attached segment, leads the way with new attached sales. Most of the new projects in San Francisco are high-rise, high-density communities in downtown. This area is considered an A+ submarket. The average attached price in the city is roughly $1.5 million with an average price per square foot of $1,307, making the area unaffordable to low- and middle-class individuals. Those in the tech sector are less impacted by high prices; the average tech wage was $156,500 in San Francisco in 2013. Still, many in their late-20s and early-30s are making good salaries but are priced out of this market. Often they are looking across the Bay Bridge into the gentrified areas of Oakland and Emeryville to purchase their first home. Despite the affordability factor, San Francisco’s draw is widespread, including good public transportation, a plethora of job opportunities (and proximity to existing jobs), a healthy and outdoorsy lifestyle, and endless cultural activities. San Francisco is also home to many attractive corporations, including Twitter, Airbnb, Craigslist, and Lyft.

Attached sales are 75% higher in San Francisco compared to San Jose. San Jose, the largest city within the Bay Area, is considered an A location. The booming tech sector is driving the growth in San Jose, particularly in North San Jose, the home of Cisco. San Jose is a built-out suburban community with 80% of new home sales focused on attached housing. In the city, the price gap between single-family detached listing home prices and attached is $693K. “Unlike the high-density in San Francisco, building in San Jose is more spread out and focuses largely on townhomes, many with three-story living and tandem parking,” explains Stephen Smiley, our Senior Vice President and Bay Area expert. He continues, “Builders are also targeting high-density condo projects in downtown San Jose that are set to hit the market later this year and in 2017.” Middle-income, well-educated individuals that earn under six figures struggle to find newly built housing options in the city, especially after the dramatic run-up of prices since the trough of 2010.

Dublin rounds out the top three for highest attached sales in the Bay Area with the average price of $764,628. Dublin, considered another A location, is a high commuter area; it is 35 miles north of San Jose and 25 miles from Oakland. The city is the second-fastest growing in California and is appealing to buyers, particularly families, for many reasons:

WOULD YOU BE WILLING TO COMMUTE AN HOUR+?

Individuals looking to buy a single-family detached home have turned to further out cites like Brentwood, where the average price is $590,971; prices in the city are still roughly 20% below their 2006 peak. Brentwood’s population has more than doubled since 2000 as the once agricultural-heavy city has become a commuter hub for those working in Bay Area employment centers. The submarket is considered a C location and still has a good future supply of developable land for more new home communities, though builders are still a little hesitant to build new homes this far from the employment centers in the Tri-Valley, San Jose, and San Francisco. The average commute times are well over an hour for most of the Brentwood commuters.

Gilroy, also known as the Garlic Capital of the World, is another commuter city that is located southeast of San Jose and Morgan Hill. Gilroy’s local economy is based around agricultural products and processing, but also provides housing to (primarily) San Jose employees looking for affordable detached options for families wanting a yard. New housing developments and sales in the city are gaining steam based on affordability, proximity to jobs, a small town atmosphere, and recreational opportunities; Gilroy is considered a B+ submarket. This is another very supply constrained market so you will see builders pushing out even further to cities like Hollister.

Of the top markets for Bay Area detached sales, Fairfield has the lowest average sales price at $526,232. Fairfield is the mid-point between San Francisco and Sacramento and serves those working throughout the Bay Area (as well as a small percentage commuting to Sacramento) willing to take a long commute in return of lower priced and larger homes. The most desirable pocket of the B- submarket is north of the 80. Vacaville, a city 10 miles north of Fairfield, offers a very comparable price alternative to Fairfield.

As the analysis highlights, there are two main strategies for builders in the Bay Area:

A typical buyer of the former will have a wage well above the San Francisco County median household income of $84,282 and will easily trade the larger square footage and lower price points available in suburbs for proximity to employment centers and city amenities. Conversely, buyers in suburbs that are an hour from the metro area (like Brentwood or Gilroy) tend to be families that value more square footage on detached lots with a yard and a more “traditional” sense of community.

Here’s an expanded list of Bay Area cities for attached and detached sales: 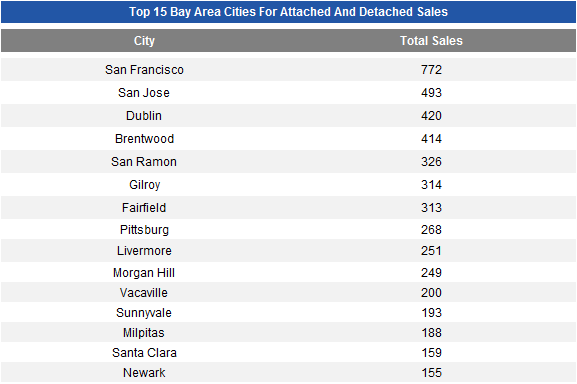 Contact us to discuss how we can help you with your strategy in the Bay Area.